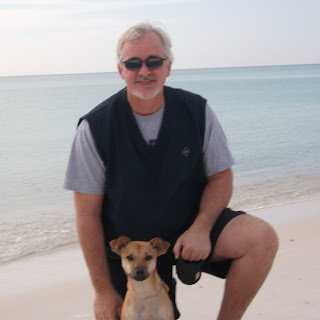 I was in the backyard cutting the grass when I spotted a wounded young Blue Jay by the fence. Michelle determined that we needed to rob a buzzard of a meal, so we gathered up the bird and headed to the that she found online. What a lucky Blue Jay.

It turns out that the is right next door to the Harris County SPCA. It's the place where they teach dogs, cats, puppies, and kittens to look sweet, loving and healthy. It’s kind of like a Zoo except the visitors get to take home one of the exhibits. The visitor also gets to drop $175.00 for the privilege.

A full blooded mutt ended up at the house on Woodbriar doing his best cute puppy impersonation. We decided to call him Cooper. Bubby Kitty took one look at Cooper. Bubby Kitty then arrogantly shot Michelle and I his favorite WTF is this look. Later that evening Bubby Kitty walked slowly and deliberately over to Cooper so he could quickly deliver a firm right hook to Cooper’s face. Thankfully, Bubby Kitty had decided claws were not needed to convey his message. The message was clear. It was simply "I was here first and I will be here last unless you bow before me". Cooper sat there, frozen with fear. Bubby Kitty turned and walked away, ass held high with feline contempt. Good. They seem to be getting along.

A few days later we followed the SPCA instructions and took him to a vet. The SPCA said they would pick up the first $500 except for parvo. I asked the the nice young Aggie vet what mix he thought Cooper is and he said Cooper is just a good ole brown dog. He also said Cooper has parvo and recommended a $2,850 hospital stay with a 50/50 shot of Cooper living. No guarantees. No refund. Turns out that parvo is a horrible puppy and budget killer. 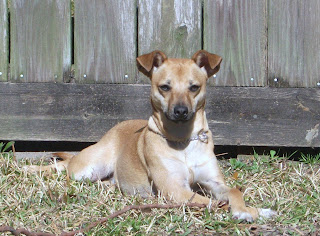 On my left, a vet with an estimate. On my right, Michelle about to drown in tears . That attached in four days? Yep. Behind door #3 was a $800 Cooper Brown Dog do it yourself home repair kit complete with antibiotics, IV fluid, and anti vomiting meds. The only thing missing was a shot of Stoli for dad.

Cooper in more ways than one owes his life to the Internet. The same Internet that led us to the wildlife rescue center next door to his adoption training center led me to a breeder discussing how to get a puppy past parvo. This is where I found the most important prescription for Cooper. He needed to have someone give him the will to live. This is exactly what Michelle and I spent a long weekend giving him. After three days of pills, sub cutaneous IV fluid injections, beef broth, pedialyte and love The Cooper Brown Dog decided he liked this world after all. When he bounded into the vet for a follow up, the assistant that helped us got all misty eyed on me. There wasn’t a dry eye in the lobby. A poster pup for parvo survival was born. Even Bubby Kitty found it in himself to give Cooper a little rub and a purr.

Cooper is 18 months old now. He has destroyed 7 pillows, 3 paint brushes, 6 shirts, 4 sets of sheets, 2 bed spreads, a remote control, and dozens of puppy proof toys from Petco. Apparently, this is our reward for saving his life. I guess the $975 first week wasn’t enough for the pet gods. 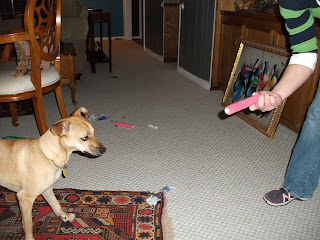 Cooper loves long walks in the evening, almonds, and chasing Bubby Kitty. He hates baths, dry food, and being left alone. He doesn’t bark much, he loves everyone, and he is over joyed everyday when we come home from work.

He is our little Cooper Brown Dog.