I had two good reasons for buying tickets to attend the Southern Star Beer Dinner at Bootsie's Heritage Cafe.  Having not been to Bootsie's yet was the first.  The second was that Michelle turned 40 the week before and I was scrambling for a gift.  See how clever that is of me.  I have a gift for buying gifts that have something in it for me.  I like beer which is a third reason, but I promised you there were only two reasons so forget I said that.  The beer part was just a nice add on.  Not a reason.  Seriously.

Michelle likes wine.  She'll have a beer when no wine is to be found.  Michelle is never far from wine, so she almost never has beer.  This was the perfect dinner gift in my estimation.  Hiding my desire for beer behind Michelle's desire for a foodiegasmic dinner was brilliant.

Mom and our buddy Dennis Tam joined us for this fine event.  Inside of 5 minutes after arriving at Bootsie's Michelle asked Chef Randy for a glass of wine.  I knew this was going to happen. Just Priceless.

That wasn't the look Chef Randy gave Michelle when she asked for wine.  That was the look he gave Michelle when he over heard her trying to convert 53c to 127.4f which was the temperature at which a farmhouse egg was cooked for one hour so the egg white and yolk arrive at the same creamy texture.
One of ten nine delightful and interesting dishes served for the evening.  This also could have been the look he shot me when chef saw me taste his pecan smoked pork liver.  I'll get to that later.

If you haven't been to Bootsie's, I suggest you get that off your to do list pretty soon.  Chef Randy Rucker has the experience and talent you would expect to find in cities like New York or Chicago and Houston thank you very much.  But Tomball has landed on the culinary map in a big way.  Randy and his staff of talented chefs are producing fantastic dining experiences.  This crew is putting out new American food with a passionate respect for land, sea, and creatures.  As Jim Rome would say "Have a take, don't suck".  That's obnoxious sports radio jock speak for "Have an opinion, and present it well".
The impression I took away is that Bootsie's has a culinary point of view to express and they do it artfully.  It seems as though the staff at Bootsie's wants to use as much locally produced ingredients as practical.  An ever expanding trend in food.  I get the whole go local movement and appreciate the passion behind it, but I'm not giving up buying Chilean wine, dungeness crab, or Ossabow pig.  I'm excited to enjoy locally produced ingredients.  I'm excited to support an independent entrepreneur that believes in what they are doing.  Since I'm an entrepreneur in the transportation and logistics industry, I'm also excited about being able to purchase a Pinot Noir from Oregon for about 12 bucks.  In other words, I'm drinking the go local Kool-Aide with a splash of Russian vodka.
Bootsie's Heritage Cafe also believes in treating what mother nature gives us with admiration and respect.  The way they translate that into a ten course dining experience is something I admire and respect.  In thinking of a phrase to describe the dishes for this dinner I would say the menu was understated sophistication complex in its simplicity.  If that makes any sense.  It does too me, because that is how I felt.
For the Southern Star Beer Dinner, the food was flavorful, interesting, and beautifully presented.  It truly was a memorable dining experience.  Some of the dishes in random order of service were: 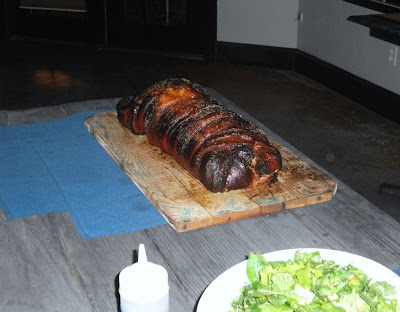 Course 9 - Next level porchetta with wild greens & tarragon - That's pork loin wrapped in pork belly that took about 2 days to prepare.  Served with the Pro Am beer .  Smokey, porky, developed, but a tad on the dry side if I'm keeping it real. Michelle said hers was juicy.  All the ladies got first shot at this gorgeous hunk of pork.  I got the end cut.  I got hosed. 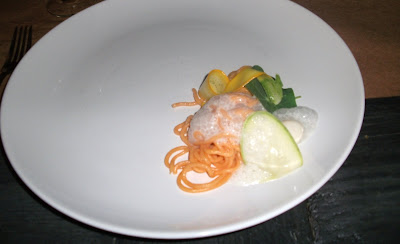 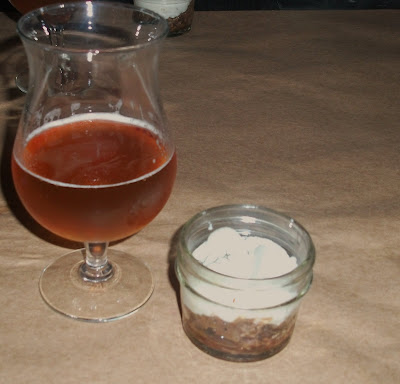 Course 6 - Parfait of braised goat & grits with black radish - Intense, spicy, and creamy.  I had multiple flavorgasms. This dish was presented with Pinebelt Ale.

The family style seating was fun.  That couple in the foreground...they live in Texas now, but they came here from Oklahoma.  They are Sooner fans.
We got past that.
Their son seated to my left was a great conversationalist; even though, he's a Sooner fan.
Okay, it took a few more beers to get past that.
I was surprised that a Sooner fan knew anything about food.  I didn't tell them that.  I was afraid they might steal my country style terrine with malted barely, cream peas & wort that was served with the Saison beer.
Let me get back to this pork liver dish.  I am liver intolerant.  The distinctive aroma and taste of liver from any animal does some weird stuff to me.  Unpleasantly weird stuff.  This limitation I have excludes me from many gourmet dishes, but its a limitation that I can live with.
Chef Randy introduced the dish by explaining the respect for the animal bound him to use "all" of the animal.  I appreciate the spirit of this belief.  My solution would be to feed the buzzards.  They serve a purpose, need to eat, and like liver.  Either that or keep hiding liver in a terrine or a pate.
Chef Randy is sneaky.  He doesn't give you the menu until the dinner is over.  He said he doesn't want diners to look ahead and develop opinions earlier than necessary.  I'm glad I didn't have to worry about a liver dish while enjoying the first three courses.  Chef Randy has a plan.  He knows what he is doing.
However...
When the word liver rolled off Chef Randy's tongue my reaction was just like little Ralphie in the movie Christmas Story when he said in slow motion "oh fudge" as his dad knocked over the lug nuts.  Mom looked at me and just smiled.  She likes liver.  When "the likes liver" acorn fell from her tree a gust of wind blew it over to a greener pasture.
In case you are not getting the point, I don't like liver.  Never have, never will, never want to.  Well that's not entirely true.  I deeply wanted to like Chef Randy's smoked pork liver with onion jam.  I liked the jam a lot.  The liver did have a smokey edge, but at the end of the day it was liver.  I tried two bites.  For Chef Randy to get me to try not one but two bites says a lot about his culinary credentials and power over a foodie like me.
Okay I'm done with the liver rant.  It's off my chest. 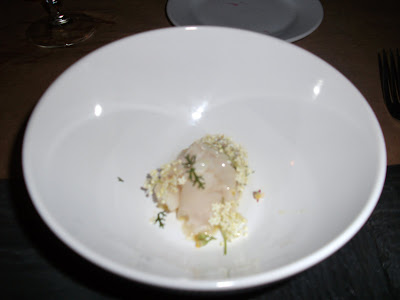 Course 1 - This was preserved grey trigger fish with yarrow & elder blossoms - Fresh, aromatic, understated, and the fish was the star.  I think there was one drop of soy, two flecks of salt, and an olive oil mist.  The opening dish was presented with the Bombshell Blonde.  Might have been my favorite dish of the night and one of the best fish dishes I've experienced. What a start.
It's also a fuzzy picture.  I am under equipped in the camera area. 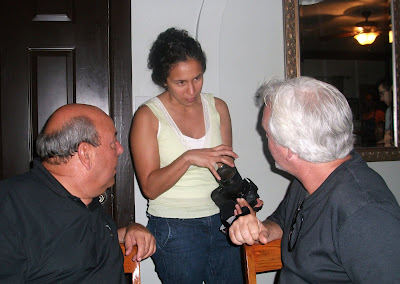 This is a fellow foodie talking about camera stuff.  Stuff I don't know about.  I had a bad case of camera envy.  I'm not sure what's more intimidating.  The price tag for a serious camera, or the user manual that comes with it.  If only there was a USB port in the back of my head.
The big finish...I got distracted.  It was a beautiful dish.  Take my word for it.  It was delicious. 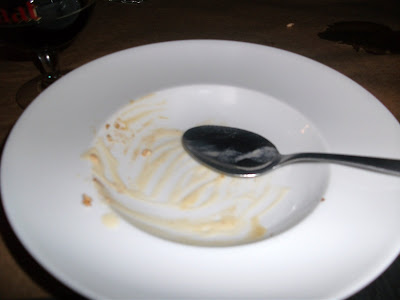 These are chefs; Mark, Ben, Chris and Carlos who also entertained us for 3 1/2  hours.  They were placing bets on who was taking better pictures and whether or not I could remember their names.  I looked it up on Bootsie's facebook page.  I didn't have to.  I swear I remembered.   I just wanted to be sure I got the spelling right.
Congratulations guys on a really wonderful menu.
Southern Star located in Conroe, TX showed off their brews.  I enjoyed them all.  Their buried hatchet stout is one of the most interesting beers I've ever tried.  It had a dark chocolate and coffee note that was very cool.  I'd give you their web link but Southern Star doesn't follow us on Twitter like Bootsie's does.
Just kidding.  Southern Star Brewery.  You guys would just google it anyway.
Many thanks to all the folks who put this dinner on.  Your hard work was enjoyed by all.
To the maestro Chef Randy Rucker...Cheers!