Update 12-6-2010 - Well Gus has been with us for a little over 3 months.  His confidence grows and grows.  He and Cooper are best buds.  Sir LanceAkittty also likes to rub on him for affection.  Gus is starting to act like a Border Collie.  He plays, runs, herds, and when bored or pissed...destroys.  This rather cold morning, Michelle is fighting a head cold, and I went into stay warm lazy mode.  Since my attention was directed towards a hot cup of coffee and my PC, Gus went outside and dug up Michelle's favorite plant.  He made a great mess, flinging dirt around the patio and into the pool.  He threw quite the temper tantrum.  While I set sipping good coffee, Gus was making a point.  If only I could have seen the dirt fly.


What have we learned from this out burst?  Get out of bed and go for a walk.  Even if its not the usual 2 miles we do most every morning.  That or landscaping work in December.

Now here is a video of Gus and Cooper having some fun that we approve.

Meet Gus. We call him Handsome Gus. He joined our
family Sept 3rd from All Border Collie rescue. Gus is about 18 months old. He weighs in at 50lbs and counting thanks to Natural Balance Ultra Premium. See reviews. Gus has a tall frame still a little in need of beefing up. 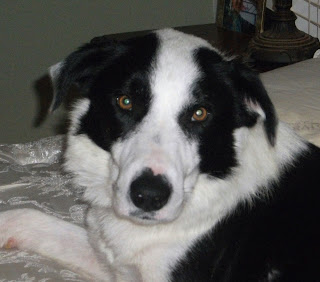 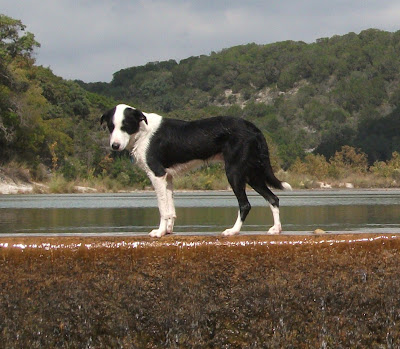 Gus came to us via the brilliant idea I had to get Cooper Brown Dog a running buddy. Cooper is all energy, so I figured a Border Collie would be a good fit. Turns out that so far Gus likes to take it easy. We are starting to see more enthusiasm from Gus as he gets more comfortable in his new home. Guess its going to take a little while for him to get his groove full on.

Sir LanceAkitty has established his role as lead butt head. Gus, being the kind gentleman that he is, has been curious as to why the claws come flying at him from the tiny fur ball hacking beady eyed tyrant. Considering Gus could extinguish the existence of the feline furry in one fell swoop it's a tribute to Gus' temperament, or perhaps his lack of confidence. Careful Bubby Kitty. Gus may take you to task one of these days. I only hope that if this happens I have a ginger figgle martini in hand to toast this accomplishment. 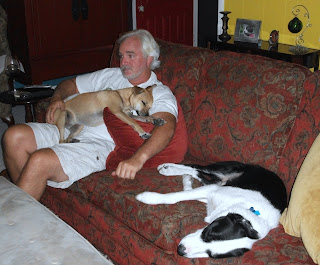 Cooper loves having Gus around as long as Gus respects Cooper's space. This includes my growing and soft belly. While I'm trying to put the brakes on a run away beer gut, Cooper finds it among his favorite places to nest.

Cooper does give Gus lots of encouragement, and even when Gus gets a little pooped he still tolerates Cooper's prodding. Day by day Gus peels off another protective layer. It's pretty cool to watch him climb out of his shell.

Perhaps the most remarkable transformation for Gus is how quickly he has trained Michelle and I. Gus gets a little needy if daddy isn't out of the sack by 7:00am (weekends too). He likes his food served promptly at 7:15am and 5:15pm. Gus doesn't mind waiting for Sir LanceAkitty to be fed first as long as I get on with it.

Gus came to us crate trained...ha ha ha. He does willingly enter the crate and lay down. He doesn't mind hanging out in there for a bit while mommy and daddy are within ear shot. The instant he senses he is alone, the barking starts and he gets himself all worked up. We have some separation anxiety issues to overcome.


I know how Gus feels. I get separation anxiety myself when I am away from a Shiner Bock.

At any rate, we are glad Gus is here. Doggie walks are far more entertaining and rewarding with him coming along. He's just a great dog...our Handsome Gus.