nine one one eleven

Sunday Michelle and I, armed with free tickets from our pal Dennis Tam, went the Houston Texans football game.  For many good reasons we were excited to attend the game.  There was to be a special ten year 9-11 remembrance coordinated by the NFL.  Texans had announced their Liberty White Out game for the occasion. It was a glorious day.  There is a buzz about the Texans in Houston.  We looked very much forward to the day.
We decided it would be fun to park downtown and catch the lite rail out to Reliant Park.  Parking is mostly free downtown on Sunday.  For $2.50 I bought two Metro Rail tickets and off we went.  By the second stop, the train was standing room only.  Lots of Liberty White Out Texans headed to the game.  Things were buzzing alright.

On the fourth stop a dark complected Latino man in plain clothes walked on pulling a wire basket cart with a large black worn sample brief case.  The fake leather was faded and ripped in places.  One latch was broken.  A pad lock rested open on the bottom of the basket. The wheels had broken spokes and rubber coming loose.  It looked like a pull cart a homeless person found in a dumpster.

This man parked his cart in the aisle right next to me and walked about 6 feet away to hold a pole.  He chatted with a Latino woman until she got off at the next stop.  I watched this man intently.  One hand on the pole, one hand in his pocket.  Some other Texans fans also looked at the case on the cart and then around the cabin of the train.

I'm considering asking this man about his case.  I'm watching him.  He is aware that I am watching him.  The man strikes up a conversation which I cannot hear with a seated Texans fan that is unaware this man has a cart with a black case 6 or 8 feet behind.  The conversation looks friendly enough.  The man does not appear to be anxious and is seemingly harmless.  He looks away when he sees me looking at him.  It occurs too me just how easy it would be to cart a bomb onto this train and blow it to smithereens with all the people in it.  I hate this thought.

Who, in their right mind, walks into a standing room only train with a old cart carrying a worn out black case on the ten year anniversary of 9-11.  It was starting to piss me off.  I'm pissed because I'm thinking about all this stuff.  I'm pissed at this man for not being a little more aware of what he was doing.  Leaving a case half unattended on a crowded train was not cool at all.

Just as curiosity, anger, and fear was about to overwhelm me into making a scene the train stopped and the man left with his cart.  Had he made one move out that door without that cart I was going to tackle him hard.  I was ready.

Michelle and I were relieved to see him get off. About one million and one thoughts had been rolling through our minds.  Eye contact, expressions with other passengers confirmed we were not alone.  Considering the day it was I reckon we all were a little more sensitive to unthinkable possibilities.  We also refused to let this fear keep us from our day's plans.

The whole thing wore off once we headed on foot to the stadium.  The home crowd was gathering for football and reflection.  And playful harassment of Colt fans.  Nothing picks the spirit up like razzing Colt fans.
Once in the stadium, and with beverage in hand we found our seats. 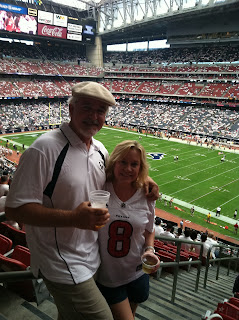 Before the players were introduced, several members of NYPD and FDNY came out of the Texans tunnel.  A goose bump tingling standing O rained down on them.  The Texans defensive starters were introduced.  The crowd was is in a full roar.  The building was buzzing.  The announcer turned our attention to the big screen and Robert De Niro spoke of 9-11.  When the sweet sound of a bugle filled the giant space with Taps 80,000 football fans went silent.  So silent it was loud.  Simulcast video of other stadiums around the country scrolled on the big screen.  For a few moments 300 million Americans remembered what is important.

It was a moving experience.


I was glad we were there.  I was proud at how we all paid our respects.  I was happy the Texans played so well.  I felt fortunate to take the ride back downtown on the train.  I felt back to normal when a lady in a Colts shirt said she was offended by a Metro employee celebrating the beat down the Texans put on the Colts.

I was grateful it was an otherwise normal Sunday in the early fall.