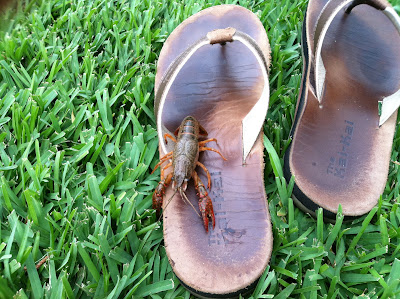 When I as a kid growing up in Oklahoma, we'd catch "crawdads" and use them for bait.  Black Bass couldn't resist them.  We moved to Houston, and as I entered my professional career in sales, Louisiana was part of my territory. Near New Orleans, a customer of mine invited me to a crawfish boil at small city park.  It was after working hours, and it became clear that this wasn't the special occasion for these guys that it was for me.  This was just something they did when the no one else owned a piece of their time.

I was introduced to the joys of a Louisiana crawfish boil not far from where it all began.  The group I was with would boil anything: shrimp, corn, hot dogs, potatoes, mushrooms, corn, garlic, green beans, and of course the little mud bugs themselves.  It's more like a party where some cooking and eating breaks out. 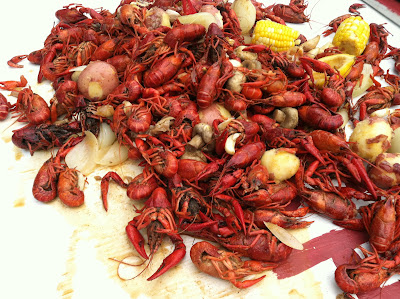 This video tells it like it is.  Our buddy John Sherman invited us over to his annual block party crawfish boil.  He gets the whole street involved for this party.  Just a perfect day to kick off your shoes and relax for a spell.

A crawfish boil is just something to do while you catch up with friends and family.  It's an awesome social event.

As far as cooking them, well that is almost like arguing about politics.   I've been to hundreds of boils and done a few myself.  It all boils down to the artful application of red pepper, salt, crab boil, and a plethora of other spices. Some like it this way and some like it that way.  Some like to let them soak a bit longer, some like to sprinkle on some extra spice at the end, and some like to toss them in butter and spice.   It's a dish with a wide variety of technique and ingredients.

While a liberal and a conservative can argue about policy and proper mud bug preparation, we all have to agree that it doesn't get any better than nibbling on some crawfish, sharing a beer, and spending time with some good folks.

You can make your own, or be like me and show up at the party.  Either way its a good day.