Oyster Tacos & Getting Schooled by a Salty Dog 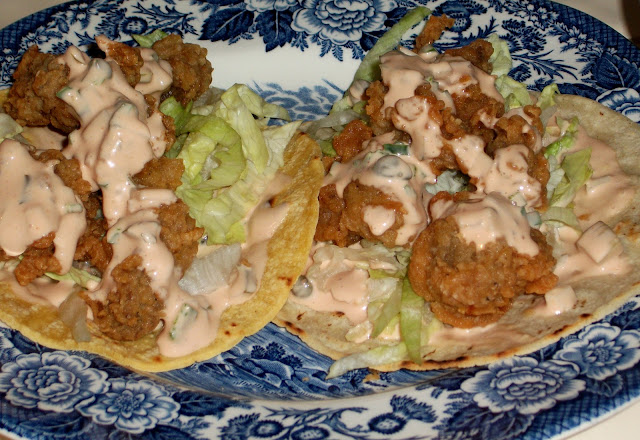 After a few days of devouring freshly shucked raw oysters we decided to change it up a bit with the ones we had left.  The weather outside wasn't exactly inviting for a patio shuck and snack party anyway.  Ever smash your knuckles on an frigid oyster shell when its about 35 outside?  Exactly.  Time to move into the warmth with this operation. 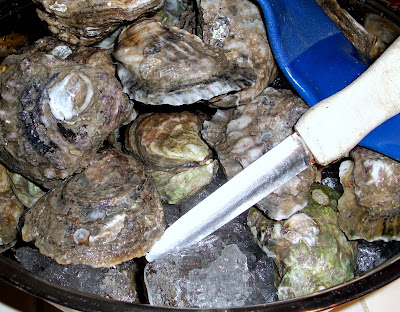 Raw oysters on the half shell are the best, but a not too distant second is a good fried one.  Since we're in Texas, might as well wrap some up in a corn tortilla.  Fried oysters, hot corn tortillas, shredded lettuce, and spicy dressing made for a great taco.

A couple of years ago Michelle and I went to her dad's house in Panama City, FL for an oyster feast.  Michelle's dad Greg is THE original salty dog.  His livelihood came hard as a commercial fisherman in the Gulf of Mexico.  There isn't much about sea navigation, hurricanes, fishing, eating seafood, and drinking that Greg doesn't know.  He can bend your ear for a spell if you give him a chance.  Don't think I've ever heard the same story twice.  He's literally got a million of them and he tells them pretty darn well.

On that night Greg broke out the fryer to make what may have been the best fried oyster I've ever eaten.  He showed me how to use self rising flour in a pot of peanut oil at the right temperature.  Greg does it all by site, sound and feel.  I've tried to duplicate his fry from that night a few times and I've made some nice fried oysters, but I still think his are better.  The difference might be the touch of a salty cook. 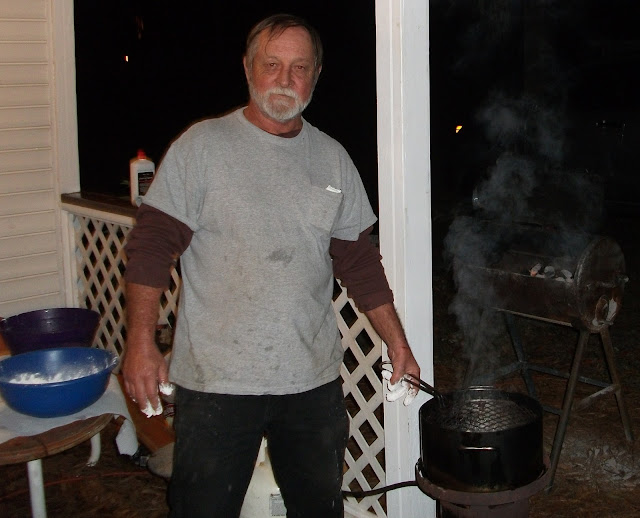 These fried oysters are real light, crispy and full of flavor.  They are great on their own, in a Po Boy, or in this case a taco.  Just like the salty dog, I didn't exactly measure everything but I'll give you my best guess on the ingredient quantities. 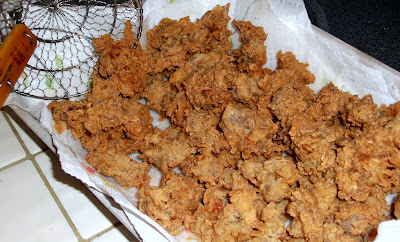 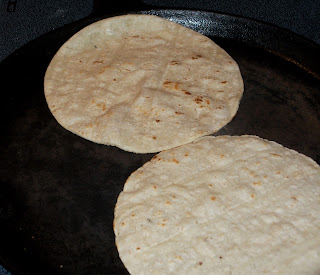 Tacos:
12 - 18 corn tortillas
half a head of lettuce shredded

Fried Oysters:
Fill pot with oil and heat at a medium to medium high setting.  Use a thermometer so you know exactly where you are with the temperature.  You'll want to drop oysters in around 375 and maintain the fry at around 350 - 375. It's easier to bring the temperature of the oil up slower because it can take a long time for it to cool.
In a bowl, whisk flour, salt and pepper to evenly mix the seasoning.  Dredge about a dozen oysters in the flour and shake off excess.  When the oil is hovering around 375 carefully drop oysters in a couple out at a time.  These will float on top so with a fork or tongs rotate them as they begin to brown up.  They should take about 6 - 8 minutes.  Once golden brown, remove with a slotted spoon and place in a pan lined with paper towels.  You can put them in a 200 degree oven to keep warm while your are frying up the next batch.

Spicy Dressing:
In a bowl mix all that stuff up.  You may want to tinker a bit to get the balance of acid and spice that you want.  Set it in the fridge to chill.

Tacos:
Grill a couple of corn tortillas at a time on a comal or iron skillet at medium high until they get a slight char.  Place them in a warmer as you go along.
Spread some dressing on a hot tortilla, add a little lettuce, add some oysters, drizzle on some more dressing and have a taco. 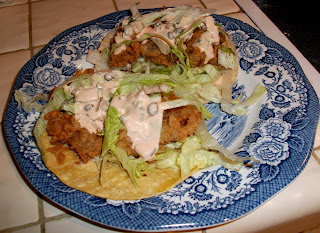